Yesterday I offered up my opinion on scary books worth reading. Today I’ll share my favorite Halloween movie picks. Some are scary, some are hilarious, some are scary AND hilarious. So here we go: Becky’s Top Ten Movies to Watch on Halloween.

MOVIE PICK ONE (SCARY): The Others.

Holy crap, this movie scared me to death, and it’s the kind of scary I adore. Not too many jump-scares, no blood and gore, just quiet dread the entire way through. Great acting, perfect pace, and oooh, there’s a twist. I do so love me a good twist.

This is one of those rare, rare cases where the movie was actually much better than the book. Richard Matheson’s novel of the same name was a mess–really aggravating and a little stupid. But the MOVIE? Fantastic. It’s terrifying, and Will Smith is amazing in his role as a man surviving the apocalypse alone. (Well, not entirely alone, and therein lies the rub.) 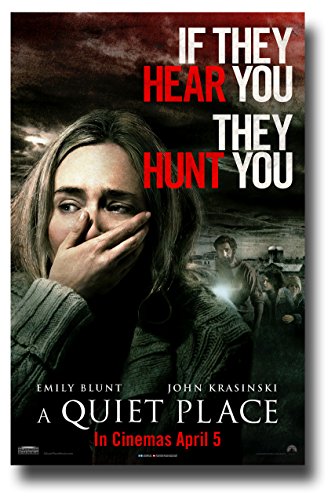 If you’ve been living under a rock and haven’t seen this movie yet, then climb out, dust yourself off, and WATCH THIS MOVIE. It’s incredible–scary, yes, but heartbreaking and awesome to experience. The acting is superb; who knew Jim from The Office had such range? And to watch him act with his real-life wife, Emily Blunt, was a treat–you feel the tenderness between them in the movie, and that’s not acting! What I love the most is the careful plotting; Krasinski and his fellow screenwriters didn’t cheat, and every “little” detail mattered. I hate when movies gloss over things and you’re left thinking, “Wait–when did that happen? How’d they do that?” There’s none of that in this movie. It’s a masterpiece of careful plotting, suspense, and storytelling.

What can I say? I’m a sucker for funny zombie movies (more on that in a moment) and gothic horror. This is gothic horror at its finest. Really, really, REALLY scary.

Believe it or not, this is my “desert island” movie (As in, if I was stuck on a desert island and could only take one movie to watch, this would be it.) I love this movie! It’s sly and hilarious and quote-worthy and just a pile of delicious codswallop. I have never gotten tired of it, and I watch it every year. The ten-year-anniversary movie, Zombieland: Double Tap was pretty good, but really, this is the one for me. Perfection.

MOVIE PICKS SIX AND SEVEN (FUNNY): Shaun of the Dead and Pride and Prejudice and Zombies.

I’m lumping these two together because, well, more zombies. Worth it though–hilarious and gross and just a good ol’ romp. I personally like to believe that Jane Austen would’ve enjoyed the updated version of her novel. It’s really well done and bloody good fun.

I stumbled across this gem quite by accident a few years ago when trolling Netflix for something to watch. What a surprise it turned out to be–absolute satire at its finest. This movie takes tired slasher-movie clichés and turns them into something new. Having two backwoods, redneck guys as the heroes who are bewildered by the rich college kids who keep dying in true slasher fashion was just genius. This is a funny, smart movie.

Okay, I’ll ‘fess up–I only really love this movie because it happens to be my 72-year-old mother’s favorite movie. 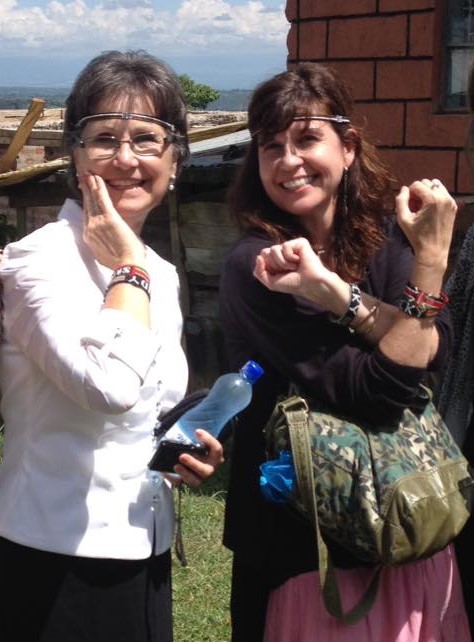 It’s early 90s shtick, and it IS funny, but honestly? It’s 10x more funny watching it with my mom because she cackles all the way through it. Still and all, it’s a blast–a silly scary movie, with or without my mom along for the ride.

And last but not least, MOVIE PICK TEN (FAMILY): The Nightmare before Christmas.

I mean, obviously this is a yearly Halloween must-see. (I sometimes watch it both at Halloween and Christmas.) The music, the story, the Tim-Burton-perfection of it all–if Halloween had a national movie, this would have to be it.

So there you have it: My top picks for things to watch on Halloween. My personal plans for the big day itself consist of me stress-eating way too many chocolate bars and noshing on a big bag of Sonic corn dogs (Halloween is 50-cent corndog day, at least where I live), whilst I jump and scream and watch the too-gross or too-scary bits of my movie-of-choice through my tiny telescope. (Right eye closed, left eye looking through the small hole I’ve left in my clenched fist to block the awful images).

What a great time of the year.

It’s almost time for that most deliciously dark night of the year, though I’ve personally been celebrating since September. (As in, that’s when the decorations went up).

To commemorate this terrible, wonderful time, I thought I’d share my picks for things to read and things to watch for Halloween. Today is the “what to read” post, so here we go with six of my favorite scary books:

BOOK PICK ONE: World War Z, by Max Brooks. (Fun fact, apropos to nothing: He’s the son of Mel Brooks and the late, great Ann Bancroft. So he’s extra cool.)

I know, I know–a zombie book? Really. I swear, it’s amazing. Not only is it gripping in subject and detail, but the narrative structure is fantastic–unconventional, to be sure, but man, it WORKS. I’ve read this book three times now, and every time I’m blown away by how good it is. (By the way, if you saw the movie version, PLEASE don’t let it sully your reading of the book. Because of the narrative structure I mentioned, this book should never have been made into a film. NEVER. It doesn’t work! I’ll let the folks at “Honest Trailers” shift you away from the movie, but do read the book.)

Shirley Jackson is my spirit animal, let’s just get that out of the way right now. I adore her writing–she can shift from hilarious (her memoirs Life Among the Savages and Raising Demons, which featured her sardonic views on motherhood, had me crying with laughter) to chilly terror in nothing to ninety flat.

This book was SCARY, boys and girls. At first, I kept thinking, “It’s just a creepy old house where things aren’t set right. Is that it?” I didn’t know at first how to feel about the characters–while Jackson has a charming way of including sparkling, clever dialogue in her books, I felt that it was sometimes forced and false, especially when dealing with the protagonist, Eleanor. She went from a suppressed, downtrodden, fearful 32-year-old woman to someone who talked and capered like a young teenage girl once she was in the house. The instant camaraderie between Theodora and herself seemed weird and unrealistic to me–they were all SO jolly–but that is the slyness of Shirley Jackson. She creeps up and slips a hook in you while you’re not looking, just a jab really, a tiny pin-prick while you’re distracted–and then she goes to work, tying you into her web. Suddenly the story was genuinely spooky and I was constantly on edge, trying to figure out what was real and what was not–and praying that no one would ever, EVER be foolish enough to open the door.

Pay attention: Jackson starts and ends the novel with the same words about the house, and those words are fantastic: “Hill House itself, not sane, stood against its hills, holding darkness within; it had stood so for eighty years and might stand for eighty more. Within, its walls continued upright, bricks met neatly, floors were firm, and doors were sensibly shut; silence lay steadily against the wood and stone of Hill House, and whatever walked there, walked alone.”

(Side note: The Netflix version of the book, while taking huge liberties with the material, was not too bad.)

If you decide you need more Shirley in your life and in more manageable, bite-sized pieces, Dark Tales is a great collection of her short stories that will blow your mind. I use “The Possibility of Evil” in my English II class, and my students really dig it.

I’ve had a longstanding relationship with Stephen King, starting when I was in around 7th grade in boarding school in Kenya. A friend lent me Salem’s Lot (my mother would never allow such “trash” in the house), and I spent the next year wearing a cross around my neck, terrified of the vampires I just knew would come to get me. I’ve read many, many of King’s books since–some great, some pretty awful–but The Stand is the one I return to over and over. It never ceases to amaze me with its depth, its almost prophetic vision of the world we live in now. (I’ve been calling COVID “Captain Trips” since March, though thankfully it turned out not to be a captain at all. Really, not even a first-mate. Possibly a tourist?)

I first read the original, edited version, then the uncut, and then the edited again, and I can confidently say that there was a reason the editor got rid of so much the first time. The first run of the book reads far better than the unedited version, so if you can get your hands on that one, do it. I think you can find it on ebay–I got mine at a used bookstore.

(And skip the made-for-tv version of the movie with Molly Ringwald, Rob Lowe, and Gary Sinise–pee-yew. What a stinker!)

BOOK PICK FOUR: The Girl with All the Gifts, by M.R. Carey.

Yes, another zombie book, and still well-written and engaging. It’s fun and scary, just like Halloween.

The movie for it was meh. Not anything to write home about, but not bad. Read the book first, though. Always. 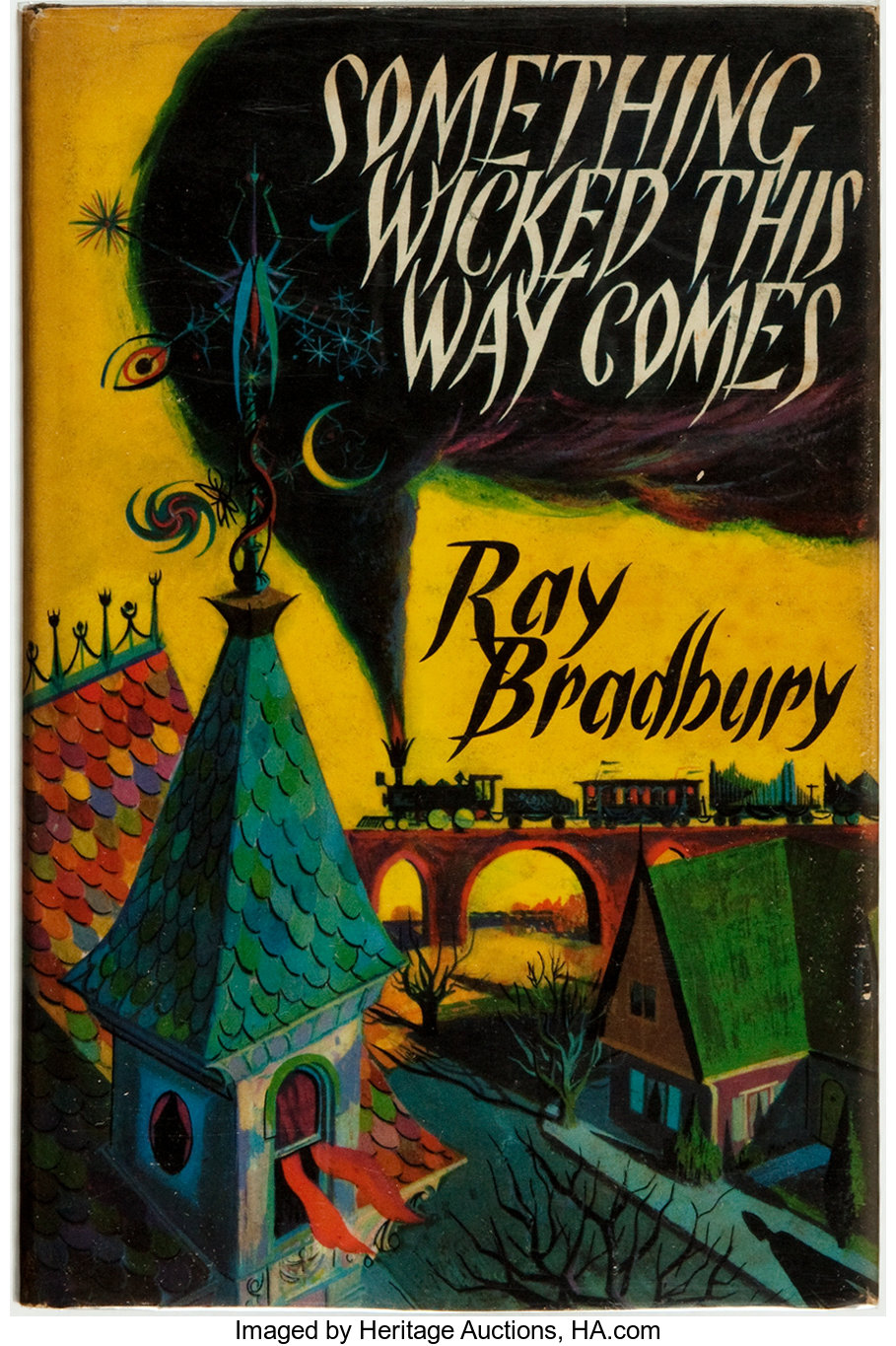 Fantastic book–scary as heck, and Bradbury’s way with words knocks me at the knees and makes me tumble right over. I had to stop and read several lines aloud just because they tasted so delicious in my mouth. In the book, Dad’s great truths about human nature was less interesting to me, but still he was a great character, and Mr. Dark was fabulous in his evil. By the pricking of my thumb . . . 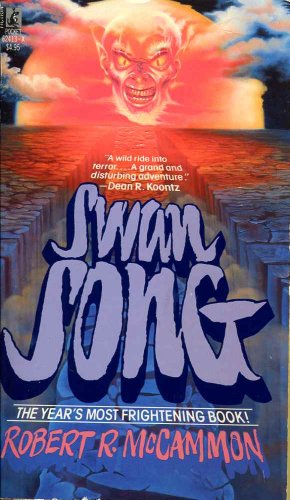 I begin by echoing the reviewers who compare this book with The Stand. The subject is obviously similar–an apocalyptic event that leaves the few humans who survive scrambling to figure out how to go on, two factions of good vs. evil marching towards each other in an inevitable show-down, a spiritual undercurrent that drives everything. HOWEVER: The story was different enough that it still felt like an original story. McCammon is gifted in character and plot development (important considering the massive size of this book). I preferred his less crass style (swearing was a minimum, as was descriptions of sex) to King’s, and as others have noted, his ending is much more developed and just BETTER than the ending in The Stand. Margaret Atwood noted once that most stories come from ancient tales, and I think rather than a knock-off of King’s tale, McCammon just drank from the same story well. I’m glad he did.

So there you have it–books to make your blood cold and your breath catch. Tomorrow I’ll share my favorite Halloween picks. Until then, stay spooky.